The Dingle Races take place this weekend Aug 5-7 2016. It is one of the oldest meetings in the country with a deep and proud tradition. In recent years it has developed enormously and is now the biggest flapper meeting in the country and attracts huge crowds to the Dingle Peninsula.

Set in a most scenic location, the magnificent Ballintaggart Course enjoys a spectacular panoramic view of both the bay and harbour. More than 160 horses from all over the country will compete in these races for prices as high as € 6,000. The centre of the racecourse is filled with bouncing castles, fortune-tellers and fair stands that sell everything from bouncing balls to saddler's sponges. Entertainment for the whole family!

It is the largest horse and pony race meeting in the country, its only three day racing festival with significant prize money, a superb setting and with over twenty one races (excluding divides) it's billing as the Cheltenham of this racing game is well merited. The most coveted prize in the country in this racing sphere is the Dawn Milk Dingle Derby over the extended two miles of the track which is run on ladies day on the Sunday.

The racing itself is run on a right handed seven furlong grass circuit with a brilliant view from the stand on this magical setting is a joy to behold. From the Derby trial stake on Friday evening to the Golden Mile on Saturday and the ding-a ling-ling time in the Dingle Derby on Sunday, the various pony derbies and other races has something for everyone who follows the horses. Winners in Dingle are treated with as much joy as those at any of the major races tracks all over the world. There are also numerous side shows on the day for those not totally interested in horse racing as well.Each year people from Scotland, Wales and England make return journeys some with entries which adds an international flavour to the meeting. It is where there are winners and losers, the ones that did and did not shine, for some the dreams came through while for others they went out like a candle in the wind. 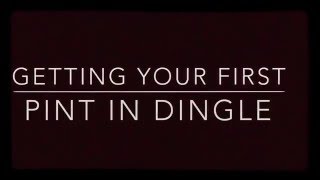 Getting your first pint in Dingle 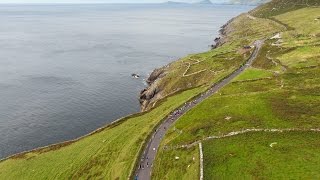